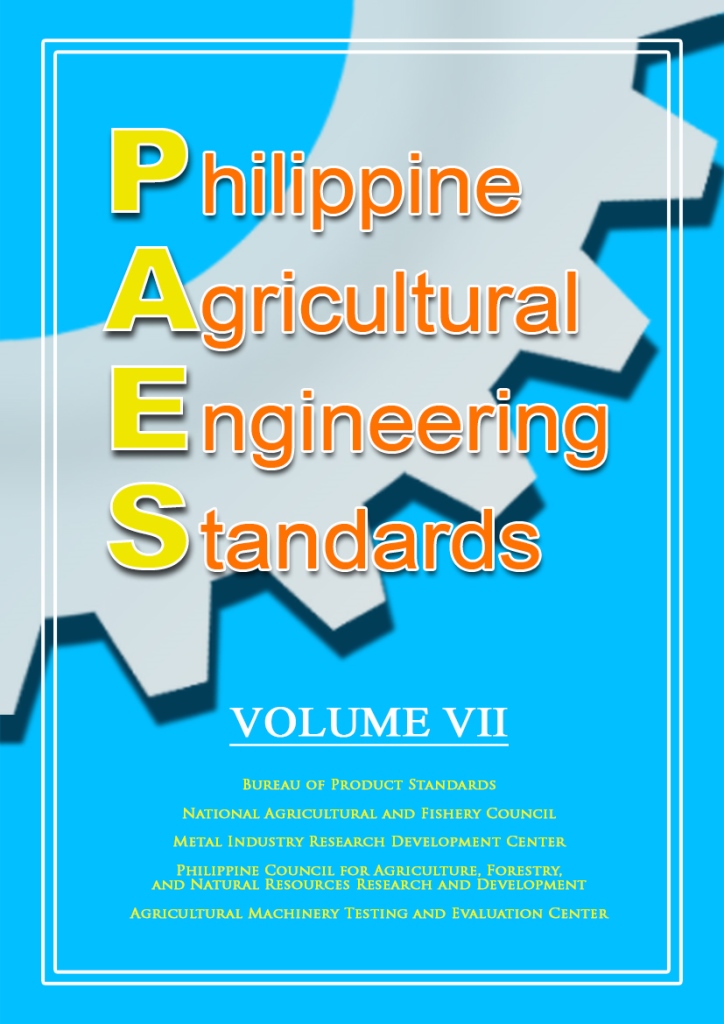 Standardization is  a way of  life  in the modern  world. And  it is a  requisite to  a development in a country like the Philippines. A sustainable agricultural modernization strongly relies on the support from the field of agricultural mechanization technologies which must continuously develop and conform with standards of performance and quality.

When the Agricultural Machinery Testing and Evaluation Center was established in 1977, one of its primary mandates was to establish standards for both local and imported agricultural machines and components. With the support of various agencies, AMTEC has been able to formulate many standards on the specifications, methods of test and performance indices of a wide variety of machines. Since the year 2000, AMTEC already came out with five volumes of the Philippine Agricultural Engineering Standards (PAES) which consist of standards on production machinery, engineering materials, agricultural structures  and postharvest machinery. Last year, AMTEC  has  developed  twelve  standards  on Slaughterhouse Equipment for Hogs, and early this year, eight standards on Multicrop Processing Machinery.

The original title of this project is ‘Development  of Standards  for  Slaughterhouse Equipment for Cattle’. The technical committee decided to change ‘Cattle’ into ‘Large Ruminants’ in order to include similar large animals like carabao.

The twelve standards included in this volume underwent the same  development process and procedures as the other standards formulated by AMTEC. The basic procedural and drafting rules, the membership of the technical committees, the public hearing and consultations, and the technical review processes all conform with international standards set by the International Organization for Standardization.

The Agricultural Machinery Testing and Evaluation Center (AMTEC) in cooperation with the National Meat Inspection Service (NMIS),  Bureau  of  Product  Standards  (BPS), Metal Industry Research and Development Center (MIRDC) and AVM Bernardo Engineering initiated the drafting of the Philippine Agricultural Engineering Standards for Slaughterhouse Equipment for Hogs. This is thru the funding support of the Department of Agriculture – National Meat Inspection Service of which the fund was administered by the University of the Philippines Los Baños Foundation, Inc. (UPLBFI).

Since 2000, AMTEC came out with five volumes of Philippine Agricultural Engineering Standards. These volumes consist of standards on production machinery, engineering materials, agricultural structures and postharvest machinery. This year, the year of the pig, twelve standards were formulated on slaughterhouse equipment for hogs. As the previous standards, these underwent extensive technical reviews, circulations and public hearings.

As the previous standards, upon its adoption by the Department of Agriculture and by the Board of Agricultural Engineering of the Professional Regulation Commission (BOAE- PRC) as technical standards in the practice of agricultural engineering, these standards shall be used in the preparation, implementation and monitoring of the specifications and performance of slaughterhouse equipment for hogs.

As the previous standards, upon its adoption by the Department of Agriculture (DA), the Board of Agricultural Engineering of the Professional Regulation Commission (BOAE- PRC) and now by the Department of Science and Technology (DOST) as technical standards in the practice of agricultural engineering, these standards shall be used in the preparation/monitoring of specifications and evaluation of the performance of multicrop processing machines.